Our Stay at Home and Read a Book Ball guest of honour Heidi Schiller, has recommended The Wonder by Emma Donoghue for you to stay at home and read. We hope you will join us at the Ball by making a donation and curling up with a book. (Perhaps this one!)

The Wonder, by Emma Donoghue 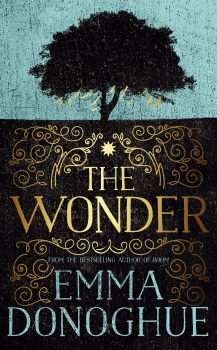 Lib, an English nurse, is summoned to keep watch over Anna, an 11-year-old girl who claims to have eaten nothing during the past four months in the boggy midlands of Ireland, seven years after the potato famine. Lib, who studied under the famous Florence Nightingale, accepts the position with great skepticism, intent on catching the girl out in an elaborate ruse for attention, fortune, or both. The girl has become an almost saint-like attraction for religious pilgrims, who come from across the continent to witness the so-called miracle of the girl who survives without sustenance.

When Lib arrives, she finds Anna and her family barely surviving in the damp Irish countryside, subsisting mainly on oatcakes and devout religious practices. Anna is not who Lib expected, and the nurse slowly uncovers much more than meets the eye as she befriends her charge during the two-week vigil.

The Wonder is a story that starts out as a medical mystery and unfolds into a tale of understanding and empathy, illustrating the dangers of xenophobia and classism. Written in beautifully lyrical prose by the author of the bestselling novel and feature film, Room, Emma Donoghue’s newest novel is provocative, elegiac, and ultimately hopeful.

Heidi Schiller is the acting branch manager of the West Point Grey branch of the Vancouver Public Library. Permanently, she is the manager of InfoAction, VPL’s fee-based research service. Prior to working at VPL, she was the readers’ services librarian at the North Vancouver City Library. She is an active member of the British Columbia Library Association.

Heidi and the Northwest Area branch heads are incredibly grateful for the help received from the VPL Friends of the Library for many branch improvements, which create more welcoming and comfortable spaces for patrons. These include new furniture for the teen area at Dunbar, new patio furniture at Kitsilano, and felt stories and easels for branch children’s services.