Sam Wiebe, the Vancouver Public Library’s 2016 Writer in Residence and one of the Stay at Home and Read a Book Ball guests of honour, has recommended One or the Other by John McFetridge for you to stay at home and read. We hope you will join us at the Ball by making a donation and curling up with a book. (Perhaps this one!)

One or the Other by John McFetridge 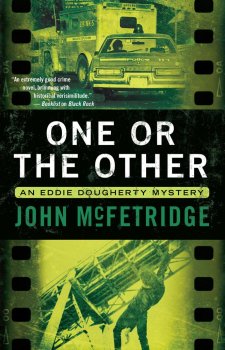 The Constable Eddie Dougherty series has been one of my favorites since the first book, Black Rock. One or the Other might be the best of the three. I’ve read a lot of classic procedurals, from Ed McBain to Wambaugh, but I’ve never read one that straight-up refutes the idea of the hero cop. All the familiar tropes–the obsessive crusade to solve a crime, the destruction of personal relationships, the bending or breaking of the law–this book and its protagonist take a hard look at those cliches and ultimately toss them. It’s a book about the role of the police in society, at a time when that question is as important as ever.

I’m the 2016 VPL Writer in Residence and a lifelong patron, and Friends of the Library does a tremendous service to the community.

I’m the author of three novels, Invisible Dead (2016 Random House/Quercus), Last of the Independents (2014 Dundurn) and Cut You Down (upcoming, 2017), as well as numerous short stories and articles. I received my MA (English) from Simon Fraser University, and I live, write, and teach in Vancouver.