Next Year, For Sure by Zoe Leigh Peterson 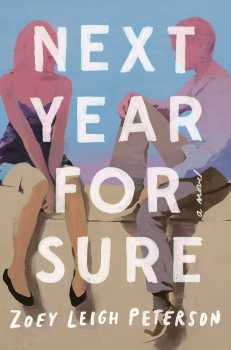 Over the years, Vancouver Public Library has become something of a literary proving ground: Alice Munro, Bill Richardson, Aislinn Hunter and many other Canadian writers have at one time worked in the VPL Library system. Today, I would like to celebrate another ex-VPL librarian, Zoey Leigh Peterson who published her first novel in 2017. The novel is Next Year, For Sure.

So what’s it about and why is Next Year, For Sure a timely read for Vancouverites? The story focuses on a young couple, Chris and Kathryn, who have found each other after a series of bad relationships. When Chris becomes attracted to a young free-spirited woman named Emily, he shares his feelings with Kathryn. She encourages him to follow his feelings. It’s one thing to take the high ground and extend her generosity towards Chris and Emily, but Kathryn’s emotions are soon in an uproar. The novel follows a year in the complex relationships of Zoey’s highly appealing characters. Their stories are humourous, dramatic, touching and, above all, thoughtfully conceived. The novel is a lovely snapshot of Vancouver.

Zoey’s focus on a young couple and their lives will appeal to Gen-X – Millennial readers. Scenes of Zoey’s characters walking drizzly, night-time streets and living in communal, Kitsilano houses will stir feelings of nostalgia for (slightly) older readers. As well, Zoey’s theme of polyamory couldn’t be more current. Next Year, For Sure will also be of interest to those involved in couple counselling and gender and sexual studies.

No stranger to the literary awards circuit, Zoey was the recipient of the Far Horizons Award for Short Fiction (The Malahat Review), the Peter Hinchcliffe Fiction Award (The New Quarterly) and, in 2017 Next Year, For Sure was long listed for the Giller Scotiabank Giller Prize. Zoey is also on CBC Books 17 writers to watch in 2017 list.

It is a pleasure to recommend this wonderful piece of long-form fiction to the Friends of the Vancouver Library. As an employee with long-service at this institution, I have seen firsthand the many contributions to our services and patrons made by this volunteer group. On behalf of my colleagues in the Central Library’s Information Services department, I hope that attendees enjoy this outstanding book.

Paul Hayes has worked at the Vancouver Public Library for 26 years, principally in the Popular Reading Division and Information Services at the Central Library. He is widely recognized as a master of reading recommendations across the system.

Guest of Honour Kyla Epstein also picked Next Year, For Sure!